As many of you are aware, the disc does not slip as it is often thought of as a hockey puck. As the diagram shows, it is the gel like centre that protrudes out, which causes the discomfort as it irritates the nerve. 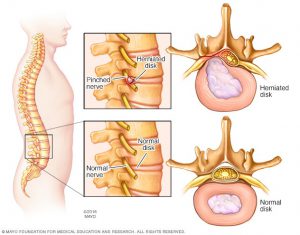 It is said that 80% of the worlds adult population have a disc bulge of sorts but are asymptomatic.

For those of you that have nerve pain as a result of a disc pathology then you have my up most sympathy, but even the symptoms differ from general morning stiffness to not being able to move.

A typical presentation of a disc pathology are usually to be stiffer in the morning (More than 1 hour) than during the day.

This is because the disc hydrates when we are sleeping and so there is more pressure placed on the bulge itself. When the disc shrinks through out the day, there is less pressure on the bulge. Equally, we are able to displace swelling when moving.

Often we see people that have been diagnosed, usually by an MRI, that they have a disc pathology. They have been told that the pain is from the disc pressing on a nerve.

There have been many times where the person has had a disc issue, but the pain is not a direct result of that disc. For example, if you have an L5 disc herniation presenting with pins and needles or shooting pain in the front of your foot and shin, this is usual as this is where the sensory part of L5 goes to. See dermatome map. 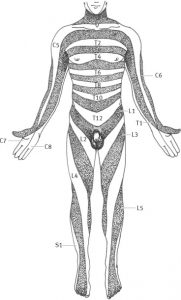 If you come to the clinic presenting with pain in the front of the thigh, having a disc issue at L5, the L5 disc maybe the overall cause, but its not directly causing the thigh pain. As you can see by the dermatome map.

Even if you have lower back pain, with no other symptoms and you happen to have an MRI showing you that you have a disc bulge, we cannot be completely sure that the disc is actually the problem.

Think of it this way, you only have test (mechanically speaking) when there are symptoms. For all we know you could have had that L5 disc bulge for a year or more.

In any case, you have to keep moving and try to re-establish balance and movement in your body. The more you allow your body to become stiff, the more pain you will feel. There is no limit to the movement you should try, but always keep inside the remit of what you can do, as the body has a way of fighting back!